When you are first starting out in your career, you can be prone to certain pressures. There’s a desire common to talented young professionals to succeed; to forge ahead and secure your standing, your worth and to validate yourself with others. There’s also a fairly common urge to do it all, to do it now – and to do it right.

So says Kristin Schulte, Solution Engineer in Enterprise Healthcare and Life Sciences with CEMS Corporate partner, Salesforce. Hers is a role that requires her to demo products and services to Salesforce customers, typically in tandem with another account executive. It’s a role that she has made her own in the almost three years she has been with Salesforce. But her tenure has not been entirely uneventful.

“I’d say it’s pretty typical that young management graduates really want to take it all on early in their career and step up to every opportunity and challenge. Certainly in my case, I wanted to do a ton of demos straight from the get-go: I was keen to take on as much as possible and I started going really fast, because I wanted to. But I was inadvertently setting myself up for failure.”

Kristin’s enthusiasm, her appetite for her work and an inherent can-do attitude led her to accept a request to lead a demo with customers – a job that in reality overstretched her in terms of time and bandwidth.

“I was working pretty much flat out, but I had a terrific rapport with this colleague. We’d become very aligned and fluid in our presentations, and I was driven by this urge to do more and more, so I said yes, even though I knew I had very little time to prepare.”

The penny drops
Armed with solid knowledge of the product and the well-established affinity with her workmate, Kristin kicked off the client meeting on the day with typical vim and energy. It wasn’t until around the half-way mark in her demo, that she realised something was wrong.

“It was going really well. I was demoing this amazing partner portal for our clients and doing a terrific job with the branding. But then I noticed that my colleague, Karl, was kind of staring at me. That and the customers began to interject, thanking me for taking the time to show them this product, but pointing out that what they actually wanted to see was a project management tool. The penny suddenly dropped: I’d been demoing the wrong thing.”

Kristin was able to re-route the meeting and fall back on her expertise – the same expertise she had built taking on as many demos as possible – but the moment left mortified. It also gave her serious pause for thought.

“When I realised what was going on I started blushing violently. And even though Karl had been supporting me on the hoof, it was pretty clear to the customer what was happening too. The moment was hugely embarrassing – although they did end up buying the project management tool. So there was a happy ending.”

It’s an anecdote that over time, Kristin has learnt to look back on and laugh about. She is also gracious enough to share the story and invite others to share in the laughter. But as a learning experience, it marked an inflection point.

“I understood that day that it’s easy to get into your comfort zone and to set a pace for yourself that is as fast as it is ambitious because you feel you are ready or you know enough. But what the experience taught me is that you also need to check in – with yourself and with others. You need to re-evaluate what you think you understand and get that sanity check by asking for feedback from others.”

Checking in, asking for and giving feedback – opening up the cognitive processes that drive decisions and performance to other people’s input – all of this has become something of a modus operandi for Kirsten now. That and “owning failings, failures and mistakes.”

“There’s nothing to be gained from covering something up. We all need to learn and to grow, and making mistakes, owning them and not being afraid to ask for feedback and response from other people is the only way to grow. Failure and feedback are the mechanisms that drive learning. And in showing and sharing your own vulnerability, you end up not only learning, but building trust.”

Opening up to being vulnerable
Sharing vulnerability is something that Kristin’s Salesforce colleague, Juliette ten Brink knows only too well. 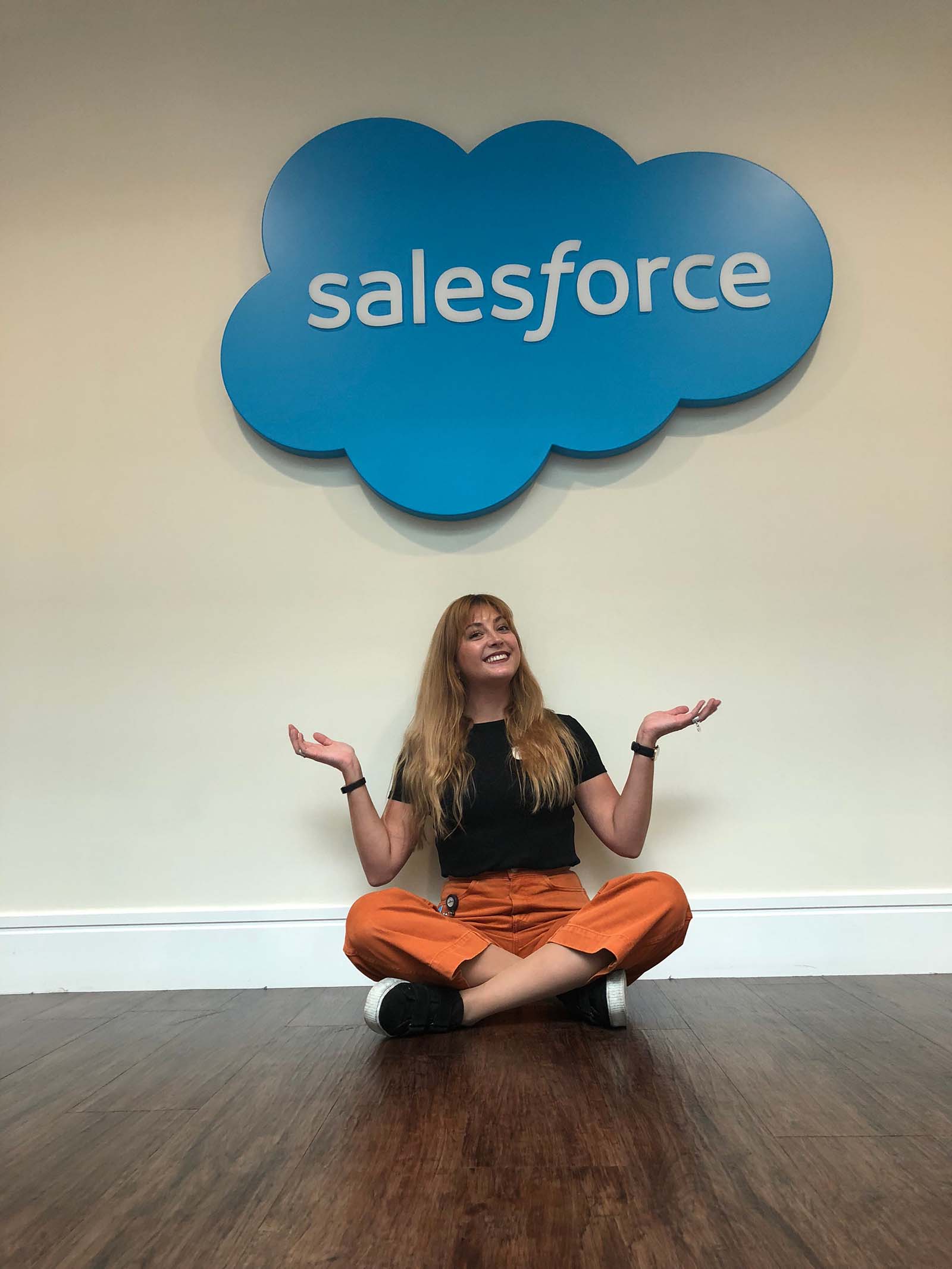 Head of Composer Sales for EMEA, Juliette has enjoyed a diverse career at Salesforce that has seen her accede to positions of regional responsibility and team leadership over the last five years. But her trajectory has also not been without its difficulties and setbacks.

A routine self-assessment around stress and wellbeing at Salesforce in 2019 revealed that she was suffering incipient symptoms of burn out; the result, she says, of a “flaw in her own belief system.”

“I think there’s a common feeling in my age group to push yourself to the limits and take pride in that. There’s almost a glorification of doing what it takes, while prioritising your own wellbeing is still not really common or accepted. When you are young, you are firing on all cylinders to get ahead and to prove your worth. And there’s this flawed thinking around now being the time to push, and resting up when we’re older.”

Recognising that she was suffering from stress and heading towards physical, emotional and cognitive exhaustion was tough. In response, she implemented a routine focused on nutrition, physical exercise, on therapy and journal writing, which helped enormously, she says. But it wasn’t until she started to feel more in control of her situation that it occurred to her to share her experience with others. 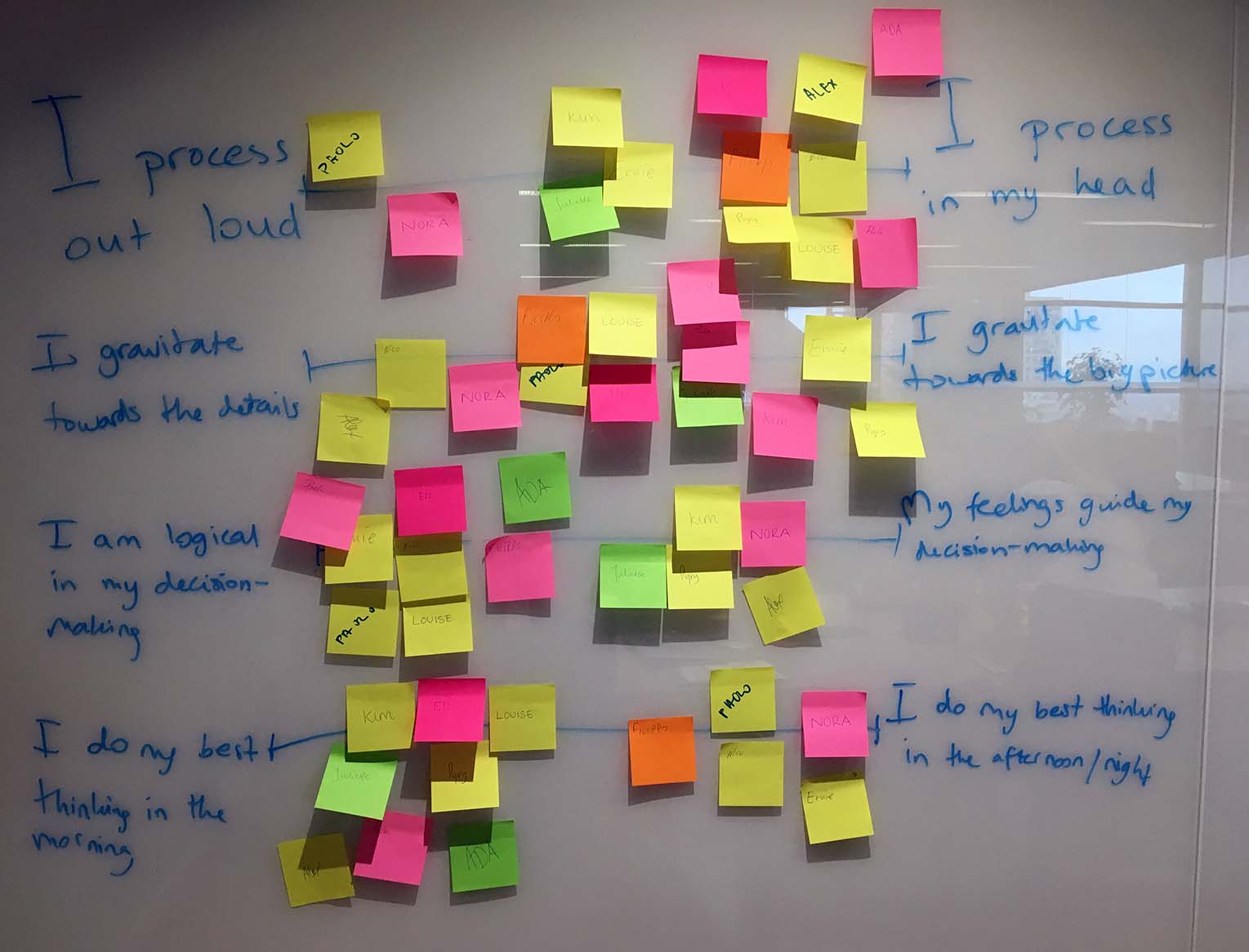 “My manager knew what was happening and was very supportive, but a sense of self-protection stopped me from talking about it with my team. I just didn’t want anyone to know. Gradually, as I started to feel better, I realised I wanted to share the process. I knew so many people who would do this same assessment and who might wave it off as I’d been tempted to. And I knew from my own experience that it didn’t have to become a major problem.”

The timing was interesting. Salesforce had recently instituted a ‘Thrive Your Mind’ initiative focused on wellbeing. A “lunch and learn” event provided the opportunity to assemble her immediate team, talk about her personal experience of burnout and to share resources – among them a personal wellbeing plan adapted to individual needs.

“I got real support from Salesforce management to bring this idea forward and to ensure that other managers had the resources to manage next steps, but I’m not going to lie. The actual event itself, speaking about something so very personal to upwards of 40 other people was terrifying. Very quickly, though, we got into brainstorming sessions to detect stressors and identify recharge activities, and the energy and response were stunning.” 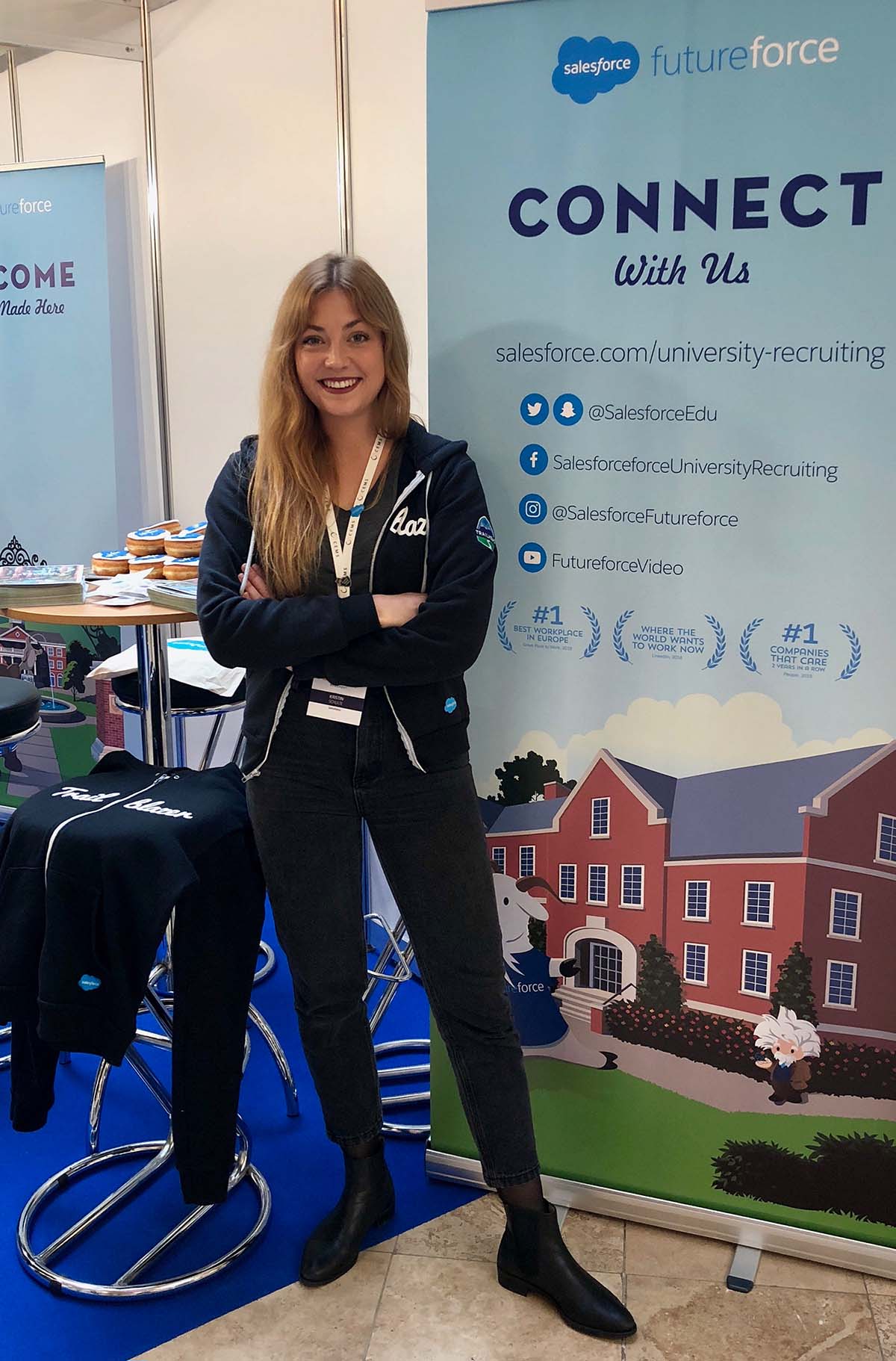 Giving others permission to be vulnerable too
So powerful was the experience that many of Juliette’s colleagues and team members reached out to her to express their thanks and to commend her on her transparency and candour. More importantly, she says, other people began to feel comfortable about opening up to her and talking about their own situations.

“I think this really is what counts in leadership: if you open up and you are vulnerable, you give everyone else permission to do the same thing. The effect in my team was that the idea of wellbeing went from something vaguely important, to something critical. And it really was perfect timing because it set us up for far greater resilience when Covid hit.”

Working in sales, cold-calling customers, and doing so within the context of lockdown and stay-at-home restrictions was both tough and isolating for her team, Juliette says. But with groundwork in place and daily check-ins “normalised,” they were in a stronger position to weather the challenges of the pandemic. It was tangible, she stresses, how resilient and knowledgeable her team was. And there are lessons here for others.

Time to normalise wellbeing
“As young people straight out of university, we are sometimes programmed to blaze ahead and to invest more in our career than we do in our own self-care. But there’s no wisdom in putting off prioritising your wellbeing. You need to build the foundation for every part of your life from the start, and that doesn’t just mean your career. You also need to build the foundation for your long-term physical, emotional and mental health.

“There’s nothing relatable about someone who pushes through and never stops – nothing likeable either. Being a superman is not human and it’s not what other people connect with or like about you. Your warmth is just as important as competence in determining your influence.”

For leaders and for business schools, she also has this advice.

“I think it’s time we normalised talking about our wellbeing and made it something cool and something just as important as knowledge or skillsets to aspire to and feel proud about. And I think that this needs to inform education just as much as it should inform leadership and workplace culture.” 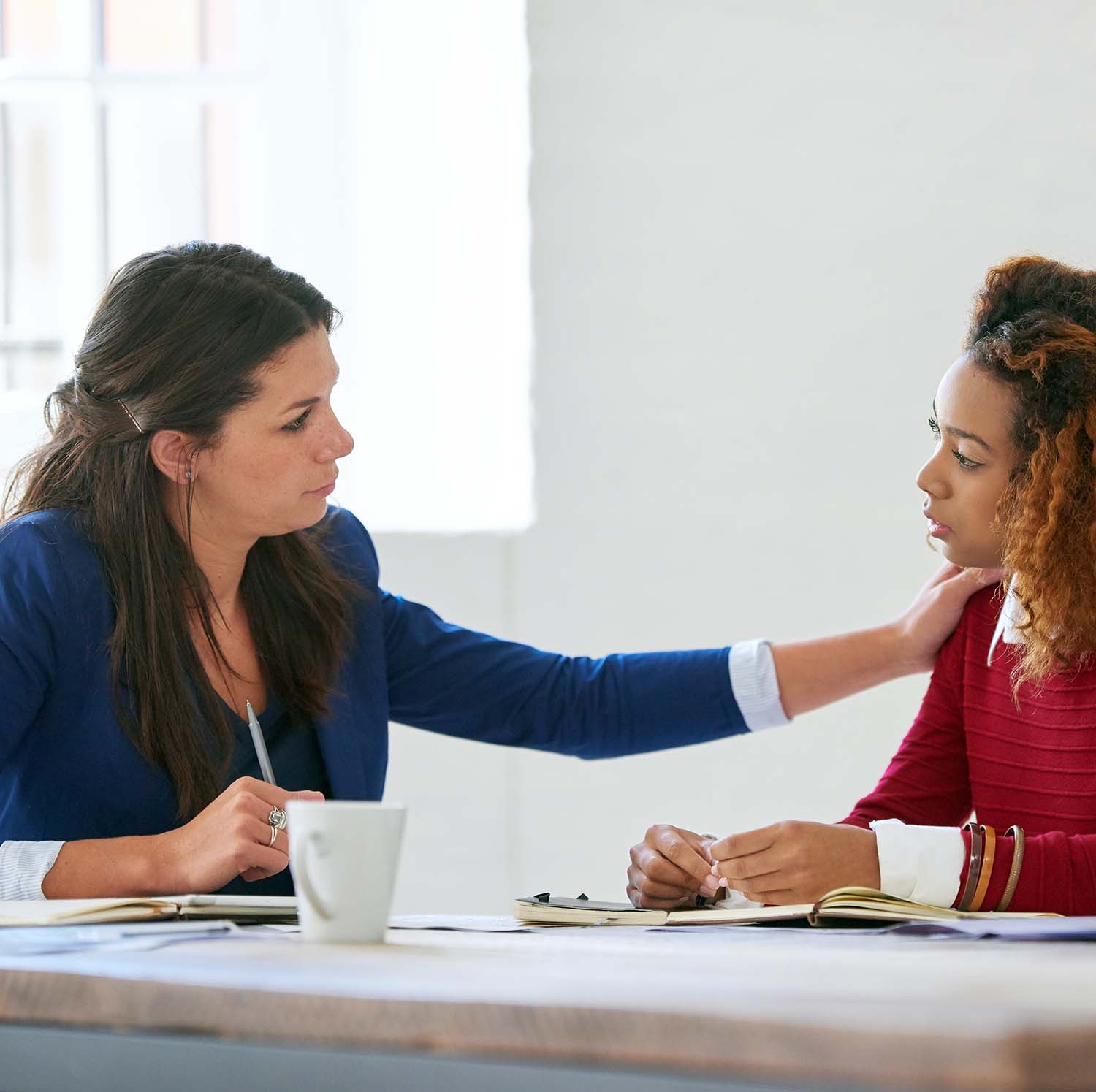 Organisations and leaders would do well, she adds, to explore tangible measures to support employees: concrete programmes, training opportunities and actionable toolkits should become the norm. Salesforce invests in benefits and programs to keep employees and their families happy and healthy, including wellness reimbursement programs, flexible time off and resources like Camp B-Well and the Thriving Mind Program to help employees strengthen their emotional health and wellbeing.

“It’s really incumbent on us going forward to avoid being empty about wellbeing. Instead of simply telling people to take care of themselves, I think we need to show them how and give them options. Just expecting your employees to tell you when they are reaching their limits is really unrealistic. Leaders have a responsibility to offer workshops, to invest in sharing tools, to make themselves available and to share their own vulnerability.

“If you are going to make statements about wellbeing and prioritising people, you need to make good on that promise. And at Salesforce, that is something that we continue to strive to do.”