When Alžbeta Budinská failed her driving test at 18 she was convinced it was the end of the world. It’s a function of age, she says. When you are young, failures can feel calamitous, no matter how transitory or inconsequential they may be in reality. And she speaks from experience – professional as well as personal.

Alžbeta heads up the graduate trainee programme with CEMS Corporate Partner, Skoda Auto, in Prague. It is her job to support and mentor young employees, including CEMS graduates, as they navigate their early career in the company. Part of it, she says, involves helping young professionals reframe the failures or challenges that they inevitably encounter and see them as a shift in trajectory instead of a hard stop.

“When I speak to graduates on our programme, I dip into my own experience with setbacks when I was younger and try to make them see that life simply moves forward in a new direction when something changes or you ‘fail.’ Of course, you have to experience this for yourself and it’s an understanding that comes with age, but it’s something common to us all and I’m happy to share my own experiences and examples to illustrate the point.”

Alžbeta points to her own experience with CEMS as a graduate student. Still very young, she lacked the requisite fluency in English to secure a place in the programme – a “failure” that she says she does not regret: “had I got the CEMS placement, I would never have ended up here at Skoda in a role that I love, working in a space that I find so fulfilling. Life simply took me on another track.”

Re-routing your trajectory
This is the same philosophical outlook that Alžbeta brings to her work with graduate trainees both before and after recruitment. And she is quick to stress that candidates who don’t make the cut with a job at Skoda should not see it as rejection or failure, but as a “mismatch in fit” and an opportunity to learn from the experience.

“When we are recruiting, there are always candidates that we turn away and it’s usually based on fit, not merit. The message I am very keen to share with young people who might feel rejected or let down when they don’t get the job is this: recruiters look at your longerterm compatibility with the organisation and industry and base decisions on that. If you don’t get this job, walk away with your head high and new insights and knowledge about the sector and the process. Don’t feel bad about it.”

During recruitment, Alžbeta and her colleagues are also on the lookout for the kind of self-reflection and awareness that candidates can demonstrate – evidence of their ability to learn from their personal failures. It’s something that she suggests candidates think about and prepare in advance. An ability to articulate learning or to sweep perceived failure under the carpet is, she says, a red light for recruiters. And rightly so. 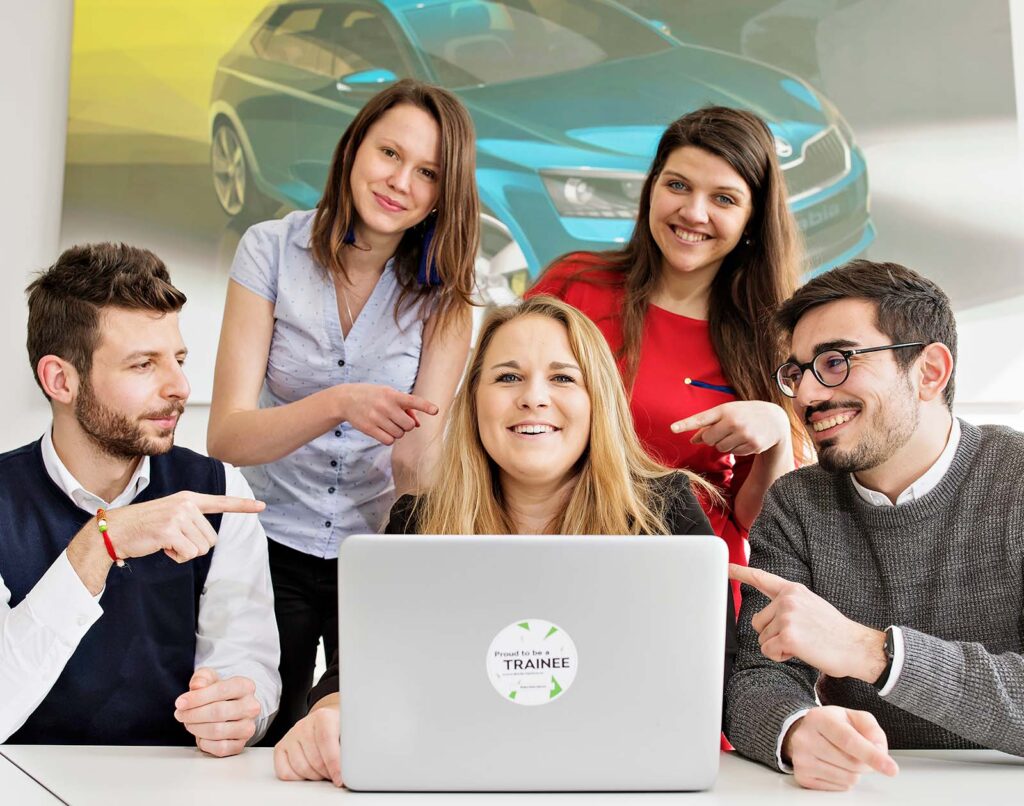 Again, she touches on her own experience coming into Skoda herself as a trainee. Convinced that marketing was the right fit, she was stunned to find that HR was in fact the area better suited to her skills – the kind of shift and an adaptation that many graduates will need to negotiate in their early career, she adds.

“One rotation in marketing was enough for me to see that it was not for me. I had to rethink my direction. So, I was left in a temporary void, grappling with feelings of failure and wondering what to do next. The panic and paralysis can set in. In the end I leveraged the fact I was a trainee and that I could choose a different rotation, start over and try something new. It was frightening, but fear is a powerful force that can and should push us forward.”

The fear factor
Fear is something she sees in abundance among Skoda’s graduate trainees. And particularly among young women, who are more prone to undersell themselves and ask for lower salaries than male counterparts. Alžbeta puts this down to a mindset that is predicated on a reluctance to push themselves forward and risk “judgment” from others, and a legacy lack of role models – especially in the motor industry.

Girls should not be put off going for a career in the automobile industry, Alžbeta insists. There is a “lot of fun” for graduates of every background and gender, plenty of opportunity and a working environment that is constantly innovating and involving.

Furthermore, the graduate programme Skoda has in place provides a strong “safety net” to empower early stage professionals as they explore the organisation and the industry; and to help them build resilience to fear and failure as they progress.

“As a corporate culture and particularly within the HR function we prioritise transparency and openness and we really work to model a more vulnerable model of leader and mentorship. I am the first to share my own experiences as a tangible way of showing young people that no one is perfect.”

Experimenting and learning
Gone too is the expectation that a job with one specific organisation should be for life, says Alžbeta. There is a growing sense of acceptance around experimentation and dipping in and out of different roles, companies or even sectors that she says Skoda and other players proactively encourage. 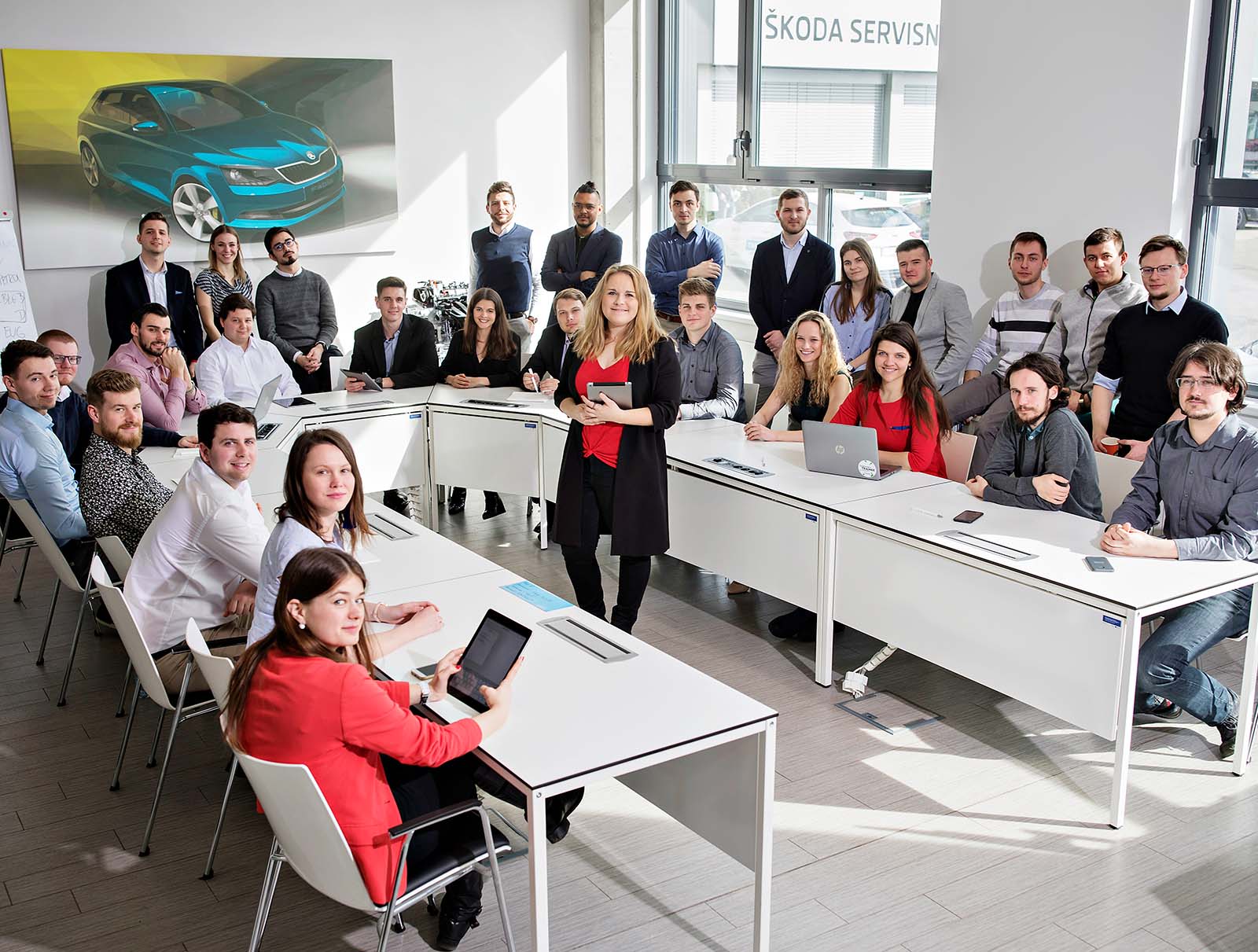 “The first year that graduates spend with us, we expect them to try out different aspects of the work; whether it’s technical or production, sales or marketing. We encourage them to try out for themselves, and if they don’t find what they’re looking for here, there are absolutely no hard feelings about moving on, and doing so with our support.”

The trainee programme at Skoda is built around onboarding, networking, CSR and marketing divisions, and graduates are assigned different roles attached to each. They are expected to work together on pilots or projects that build new skills and knowledge while fomenting core leadership competencies. This year’s cohort working within the networking division had to grapple with the restrictions imposed by Covid-19 – in particular, the requirement that any event or conference be conducted online. For the trainees, says Alžbeta, it was a first-hand experience of failure.

“The odds were stacked against any pilot or project being successful for our networking team. Inevitably, the virtual event they launched to bring the international areas of the company together effectively tanked – only 30 people signed up. People were suffering screen fatigue! But it was a great learning experience. We encouraged them to take it on the chin and reassured them that elements of the project could be repurposed later in the year to galvanise more attendance. It simply wasn’t a big deal. We will use their ideas in the future.” 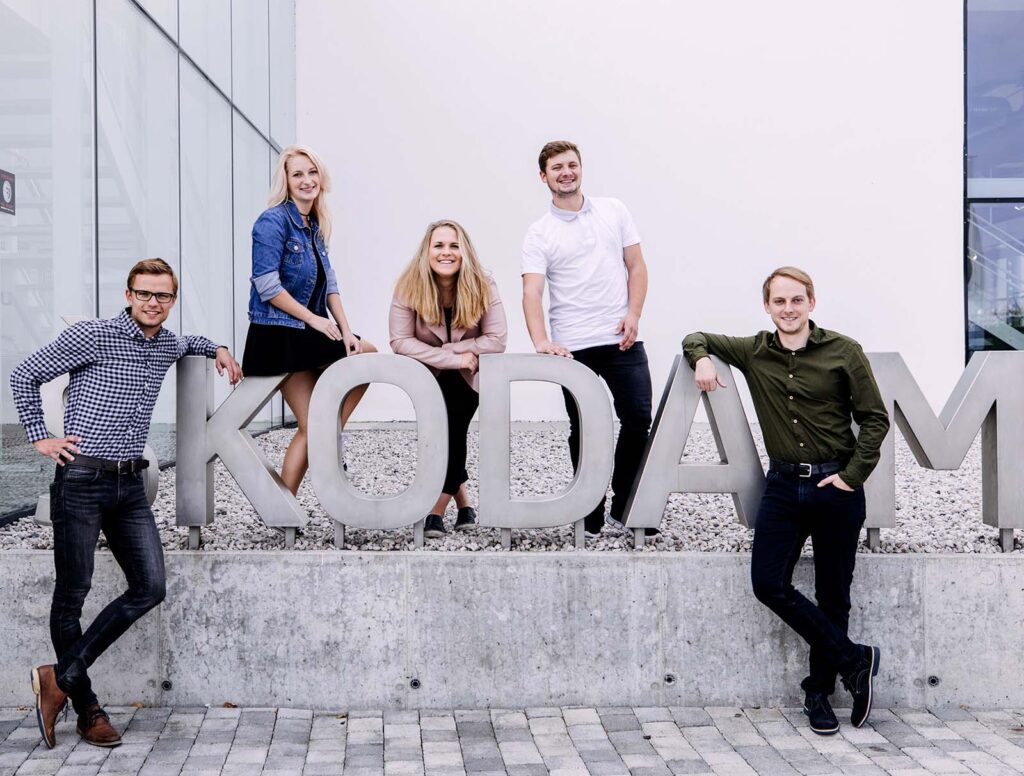 Ask for help – it’s no big deal
Of course, no one graduate is like another, and each individual’s experience will be as unique as they are. That being said, Alžbeta has noticed certain qualities that she says distinguish CEMS graduates from their peers when they arrive at Skoda.

First there is a can-do dynamic that typically drives CEMSies forward and which likely stems from extensive international exposure. But while that is “great,” there is a corollary quality that can hinder progress. And that’s a reluctance to ask for help.

“I see it most with CEMS students. They tend to see asking for assistance as succumbing to weakness in some way – as a sign of failure. But seeking help when you need it is anything but weak. It’s a chance to learn, to see things from a new perspective, and to grow. So my advice to CEMSies everywhere is just that. Be open and reach out when you need to. It’s really not a big deal!”