Immigrant populations have been growing in virtually all OECD countries over the last decade.

Latest figures put the annual influx of permanent immigrants at just over five million people. Of these, some are economic migrants looking for opportunities to improve their living standards. Another category are refugees: people proven to be in dire need of international protection.

For many of these people, the prospect of returning home any time soon are slim. Forcibly displaced by wars, violent conflict or persecution, they are often obliged to view their host country as a permanent place of residence – a new home to put down roots, raise families and earn a living.

But the challenges facing them are manifold, says Thomas Liebig from the International Migration Division of the OECD.

“For a high proportion of refugees, integration is a challenge. In contrast to labour migrants, these people don’t arrive by choice. They haven’t planned to relocate in pursuit of existing jobs and often do not have easily transferable skills or sufficient fluency in host languages to find jobs. In this sense, the odds that favour their professional integration are much weaker.”

And then there are the societal challenges.

A high concentration of disadvantaged people (often in areas that are already home to disadvantaged populations) difficulties in adapting to new social contexts, a chronic failure to return failed asylum seekers to their country of origin and disproportionate press coverage of negative outcomes – all these can tip public opinion against refugee populations, making social integration all the more complicated.

“Refugees and immigrants in general are often scapegoats for social and economic shifts. They tend to get the blame when things change, even if this change is unrelated to their presence, simply because of media, fake news and the rise of populism, it has become so much easier to perpetuate biases.”

But as conflicts continue to displace people and with migration approaching record highs, the imperative to do more to help newcomers integrate is only set to become more acute.And failure to do so, warns Liebig, will only lead to a “vicious cycle” of marginalisation – with all of the economic and social costs that that entails.

“For migration to play a positive role both for migrants and host societies, it is imperative that integration succeeds. Successful integration of migrants and their children  who are already in the host country is a precondition for the acceptance of further migration by the host-country society. We have seen too much focus on a control in migration management historically – and far too little on integration.” 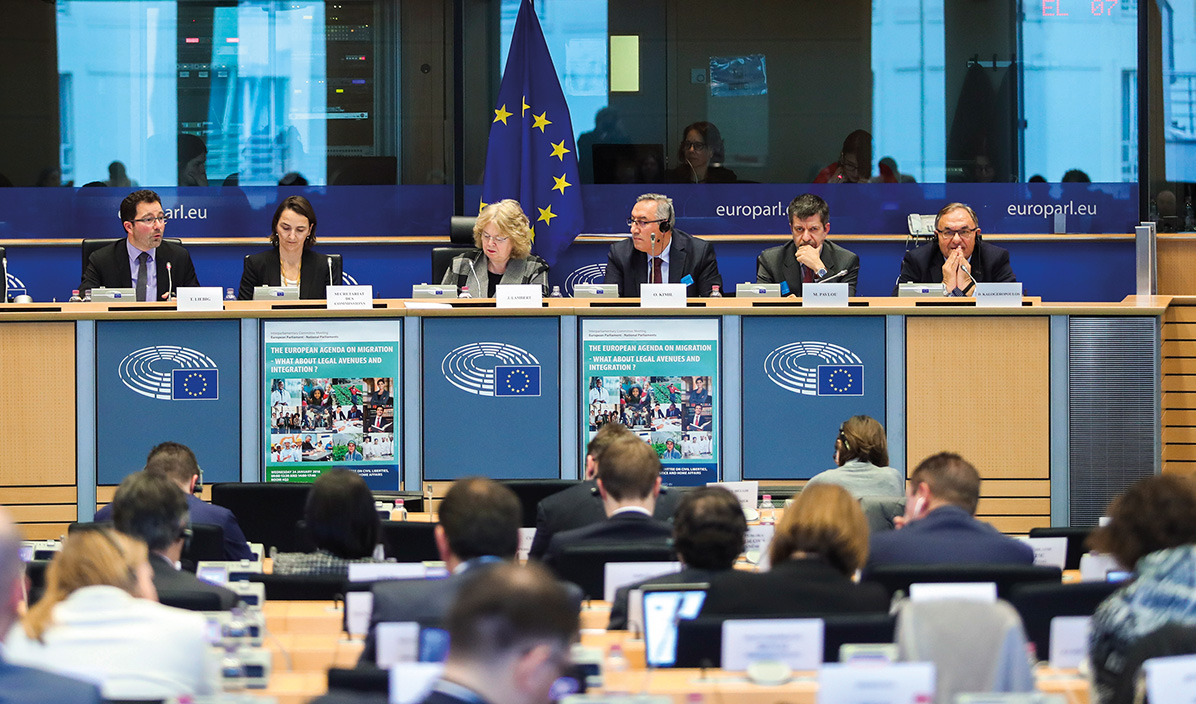 One enterprising CEMS alumnus who is very much alive to the need to accelerate integration and the benefits of doing so is CEMS graduate, Diederick van der Wijk.

The idea, says Diederick, is to empower enterprising newcomers to launch, fund and grow their own businesses and thereby achieve self-reliance, better integration – and a chance to make a valuable contribution in their new home country.

“It all stems from our joint desire to pursue something with purpose and social impact, and to address one of the most acute challenges in Dutch society. David, Laura and I are all passionate about entrepreneurship and we saw the potential to achieve our objectives simultaneously.”

Refugees Forward puts newcomer entrepreneurs through an intensive training programme that gives them one-to-one coaching with industry experts, as well as access to an extensive support network of corporate partners who give additional input on areas like strategy, finance, legal and marketing. These partners include Mazars, Deloitte, Linklaters and Uber.

Diederick has further leveraged his CEMS connections to bring current students into the fold. 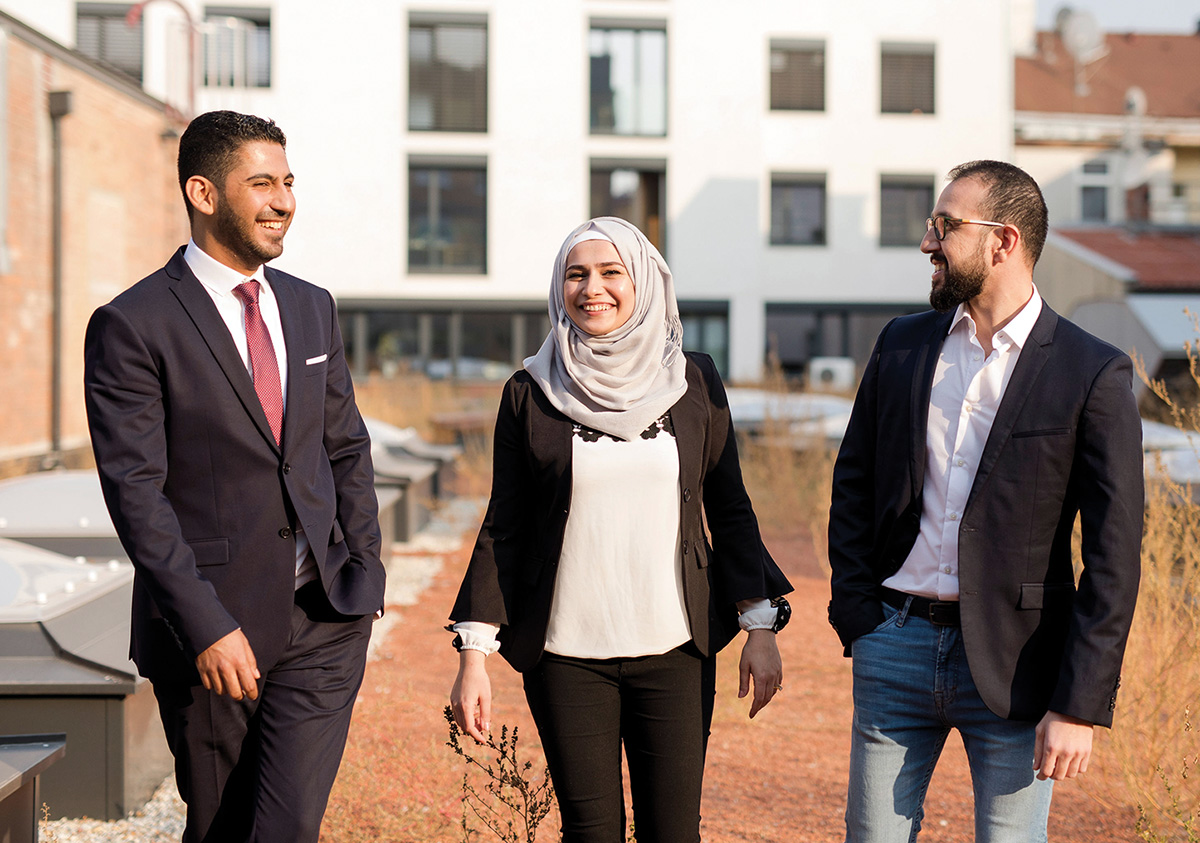 “We invite CEMSies to work together in teams with our participants, which is a real win-win for everyone. Participants benefit from regular and steady exposure to support, input and access to the kinds of cutting-edge ideas and thinking that students bring. Meanwhile, the students build up a huge amount of real-world experience, honing their own consultancy skills and gaining deeper understanding of multi-cultural business issues – all while challenging their own preconceptions.”

And the win-win translates into hard metrics too.

Since 2018, Refugees Forward has launched no fewer than 12 viable businesses, raised more than €300,500 in investment and saved the Dutch government some €73,500 in social security payments. And those figures are set to more than quadruple by the end of 2019. “We have ambitious growth objectives,” says Diederick. “By 2020 we aim to be putting more than 200 entrepreneurs from refugee backgrounds through their paces, changing their lives and those of the people they go on to employ.”

Entrepreneurship, he says, is a great leveller. “If you open the door to entrepreneurship and allow people to demonstrate their talent, their resourcefulness and their creativity, you achieve a number of things: you shift the narrative away from charity – the simplistic notion of helping those in need that can dehumanise people – and you position them more accurately as business people, achievers, risk-takers and innovators. These are people who are empowered to drive economic growth in their new social contexts, create jobs and – crucially – become role models for others within their communities. They set example and provide hope.”

Another CEMS graduate looking to shift the narrative on the integration of refugees is Nina Poxleitner, founder of More Than One Perspective (MTOP), a social enterprise that operates on two critical fronts.

Since 2016, MTOP has been providing soft skills training, professional coaching and job placement services to highly skilled newcomers from IT and engineering backgrounds. Last November, Nina and her team launched a new initiative providing leadership development training to partner organisations – with a twist.

“We founded MTOP with the view to meeting companies’ demand for highly skilled workers while playing a role in facilitating the integration of immigrant workers into Austrian society,” says Nina, a graduate of the University of Vienna. “The idea was to help bridge the skills gap by assisting talented people to navigate the complexities of Austrian hiring processes and legal systems, while working with organisations to define their needs and identify people with the right profiles and qualifications to step into jobs.”

And the impact has been significant.

With public funding from the Austrian government and the European Union, and income from the fees paid by hiring companies, MTOP has successfully rolled out its six-month training programme over the last three years, transforming the prospects and the lives of more than 160 participants to date. Of these, some 70 percent have been successfully placed in high-status jobs with partner corporations that include Deloitte.

But that’s not all.

Spotting an opportunity to further leverage their extensive participant talent pool, Nina and her team piloted a new initiative in late 2018. The idea was to deliver leadership development training to MTOP partners that would simultaneously deliver real-world, hands-on practice, build much-needed multi-cultural sensibilities and challenge entrenched stereo-types and biased thinking.

“We realised that the integration issue goes beyond equipping candidates with the know-how and the soft skills to build killer CVs and ace interviews. It’s also about really addressing the kinds of prejudices and biases that block recruiters from seeing people’s potential. So we designed a leadership programme for executives in our partners organisations that gives them a chance to mentor a real group of real people from refugee backgrounds – participants in our training programme. They get the opportunity to experience managing real people from different cultures. And to rethink their own perspectives, while challenging those of others within their organisation.”

A pilot cycle of leadership training in the last six months has garnered positive feedback from partners, and further programmes are being rolled out between July and September of 2019. MTOP also has longer-term plans to optimise diversity by bringing different companies together in mixed training packages.

It’s all part of “closing the circle,” says Nina. “We started by addressing skills shortages and the waste of talent by helping underrepresented people skill up and matching them to jobs. With the leadership development piece, we’re offering multicultural training that challenges the biased thinking that blocks diversity. So while what we do is about helping talented people restart their lives in a new environment, it’s also about empowering businesses and people from privileged backgrounds reframe the way we think about those who are less privileged.”

Carolin Oeschlager is a CEMS student at the University of Vienna (WU). For the last 12 months, she has been leading the MORE Buddy initiative – a project that she launched that matches student volunteers and prospective undergraduates from refugee backgrounds through social, cultural and sporting activities.

The experience, she says, has been as transformative in terms of her thinking, as it has been personally enriching.

“MORE began at University of Vienna to help prepare incoming students to study at the university. I founded the buddy club to bring people together in a social and cultural mentoring dynamic as a way of building understanding, helping newcomers to further develop their German language skills, and basically challenging regular students to lose their fear of foreigners,” Carolin laughs.

WU students are also charged with helping their “buddies” with practical challenges such as applying for internships| and other administrative issues. 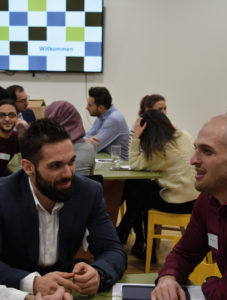 By her own admission, Carolin was initially sceptical about getting involved.

“I really didn’t know what to expect going into it. I think there was a generalised suspicion towards the programme, largely fuelled by images in the media and negative experiences with refugee populations. But gradually the programme began to gain traction. Buddying breaks down barriers. It fosters a human contact that opens you up to new people and new experiences on a very personal level.” She cites a cultural excursion to the Mauthausen Concentration Camps during which she was surprised by how much more her MORE buddies knew about Austrian history than she did – an experience that underscored the mutual learning potential that the initiative offered.

“It’s not about you giving your time in a one-sided way. And for the students from refugee backgrounds, it’s not just about taking. It’s about both sides bringing something and contributing.”

MORE is also an example of getting around the kinds of bureaucratic roadblocks that inhibit incoming populations from integrating quickly and effectively. 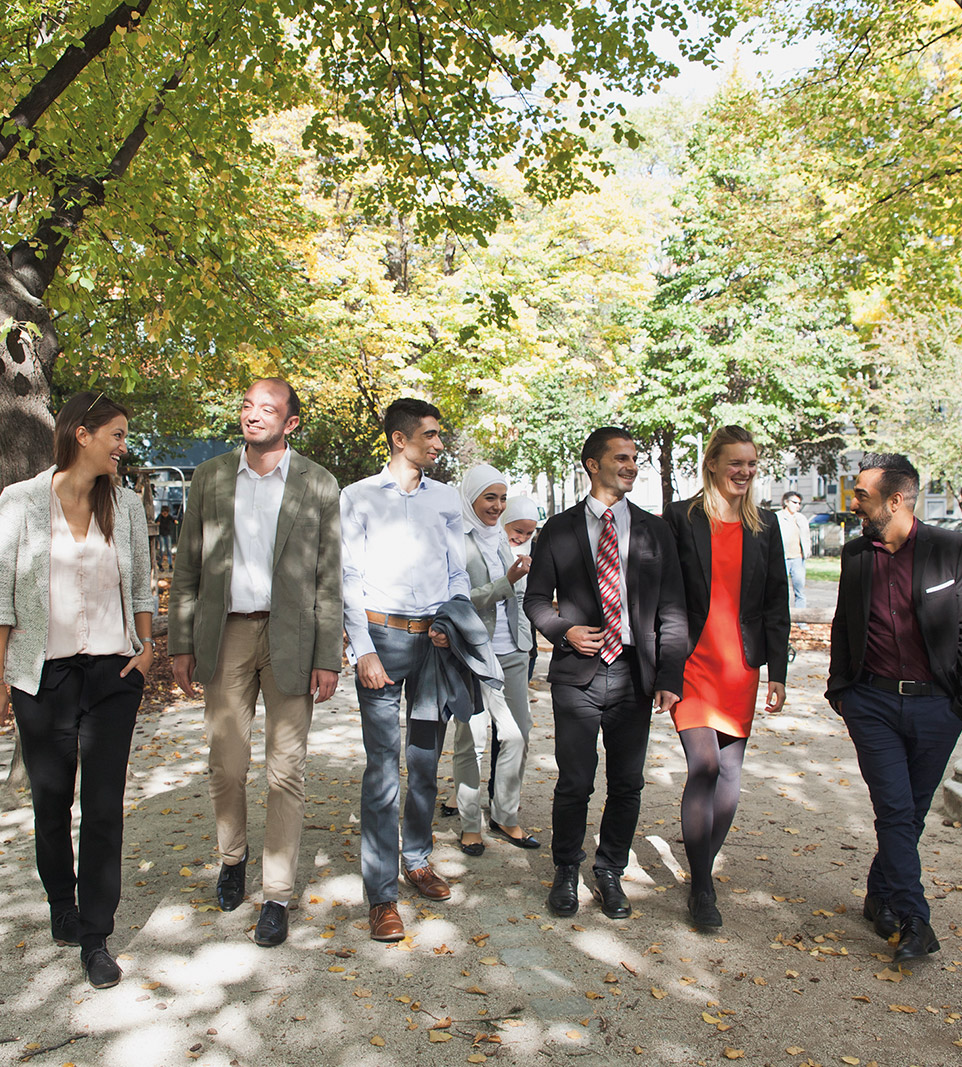 “In Austria there are so formal procedures that stand between people and the opportunity to work or study or even just learn German. When you look at it objectively, it’s as though our society is not providing enough opportunities for people to integrate and have an impact – which, in my experience, is exactly what most people want to do. Things like MORE are easily replicable projects that help us get past regulations and fast track knowledge-sharing and assimilation on a personal level but in a way that benefits everyone and that can be scaled.”

Thomas Liebig agrees that education and the private sector can both play a critical role in overcoming the regulatory issues that hinder integration.

He particularly welcomes mentoring initiatives like MORE that benefit both mentor and mentee, and that can be put together with minimal infrastructure and reproduced across different organisations and structures with relative ease. And he stresses the imperative to do so.

It is incumbent on us, he says, to do more to transform a potential crisis into a win-win scenario that not only fosters human understanding and learning, but gives everyone an opportunity to “do better.”